Join us for the premier North Bay family fun event!

The Canadian Forces (CF) Snowbirds, 431 Air Demonstration Squadron are a Canadian icon comprised of Canadian Armed Forces (CAF) members and National Defence Public Service employees.
They work as a team to bring thrilling performances. Serving as ambassadors of the CAF, the CF Snowbirds demonstrate the high level of skill, professionalism, teamwork, discipline and dedication inherent in the men and women of the CAF and they inspire the pursuit of excellence wherever they go in North America.
Learn more about the Snowbirds

The A-10 is the Air Force’s premier close air support aircraft, providing invaluable protection to troops on the ground. The Air Combat Command A-10C Thunderbolt II Demonstration Team, stationed out of Davis-Monthan Air Force Base, Arizona, brings the aircraft to air shows around the country to showcase the unique combat capabilities of the A-10 “Warthog.” They perform precision aerial maneuvers while highlighting the mission and professionalism of the men and women of the United States Air Force.
Learn More about A-10 “Warthog” Demonstration

Each year, the Wings of Blue Demonstration Team performs at more than 50 special events in front of over 2 million spectators. Demonstration venues include airshows, NFL and College football games, and special events across the nation and around the world. The Wings of Blue have demonstrated their intricate aerial skills at major venues such as the BCS National Championship Game, the Orange Bowl, the Rose Bowl, the Fiesta Bowl, the Buffalo Wild Wings Bowl, NFL Monday Night Football games, NASCAR Races, civilian airshows, and DoD Open Houses. Wings of Blue demonstrators strive for excellence at each performance, both in the air and on the ground. The Wings of Blue Demonstrators are proud to represent the United States Air Force and the Air Force Academy. They understand that they represent over 200,000 active duty airmen serving around the world.

Welcoming you to the Air Show this year will be the USAF Travis Brass Ensemble. They have been delighting audiences in the Western U.S. for several decades. Travis Brass is a brass quintet made up of two trumpets, a horn, a euphonium and a tuba. As part of Air Force Public Affairs, they are charged with delivering the Air Force story to communities within their 5-state touring region of California, Oregon, Washington, Utah, and Arizona. Finally as professional musicians, they deliver excellence by providing entertaining, exceptional concerts. We are excited to have them perform this year. Learn more about the Travis Brass Ensemble

The Hawker Sea Fury has been considered by many to be the King of propeller-driven fighters. It’s large size, abundant power and graceful lines add to its stunning appeal either on the ground or in the air. Now add the visual effects of dense smoke contrails following it through the skies and you have an idea of the incredible aerobatic display performed by Dennis Sanders as he puts the Sea Fury through its paces. Watch the effects of wing-tip vorticies and enjoy the sights and sounds of this of this powerful machine.

“Flying the MXS-R aerobatic aircraft by mx aircraft, Brad brings power and performance into each airshow. Watch as he pushes the envelope of one of the most advanced aerobatic aircraft in the world today. Brad will delight and amaze the audience while remaining well within his tight margin of safety.”

Ken grew up around the Abbotsford Airport and the world-famous Abbotsford International Airshow.  While working at his family’s farm, he would often be caught looking up to the sky to catch a Cessna landing or the Air Cadets towing yet another glider up to altitude. As a little boy, he would sit on a wooden-rail fence each August, and watch in awe as amazing pilots, heroes to a young boy enraptured by the magic of flight, flew their airplanes in to incredible loops and hammerheads at the annual airshow.

While he was certainly enthralled by the many amazing flying machines that screamed over his head each summer, he was particularly interested in the people who announced the action over the loud speakers, thinking they had a pretty awesome gig. Thus began a 30+ year interest in airshow announcing.

Ken’s announcing career took off under the expert tutelage of announcing mentors, Bob Singleton and Roy Hafeli eight years ago. Since then, he has had the privilege of announcing airshows both as one-half of H2A2 Airshow Announcers or as a solo announcer across Canada and the United States including Abbotsford, BC, Airdrie, AB, Dawson Creek, BC, Fort St. John, BC, Greenwood, NS, Lethbridge, AB, Madras, OR, Moose Jaw, SA, Paine Field, WA, Peace River, AB, Rocky Mountain House, AB, Salinas, CA, Tacoma, WA, Vancouver, BC (Celebration of Light) and Historic Flight Foundation – Vintage Aircraft Weekend, WA. Ken also has the great honour of being one of the only civilian announcers to have narrated an official performance of the CAF Snowbirds.

A theatre-producer, director and actor by profession, Ken is the Executive/Artistic Director of Gallery 7 Theatre in his home-town of Abbotsford, BC. He holds a private pilot’s license with a night endorsement, and is a member of the Abbotsford Flying Club, International Council of Airshows (ICAS) and Northwest Council of Airshows (NWCAS).
Ken’s love for airplanes & airshows, coupled with his experience as a private pilot and as an actor, director & producer, make him an ideal member of any airshow announcing team, providing airshow fans with informative and entertaining commentary that puts people right in to the cockpit. His motto for announcing is “Entertain – Inform – Inspire”. 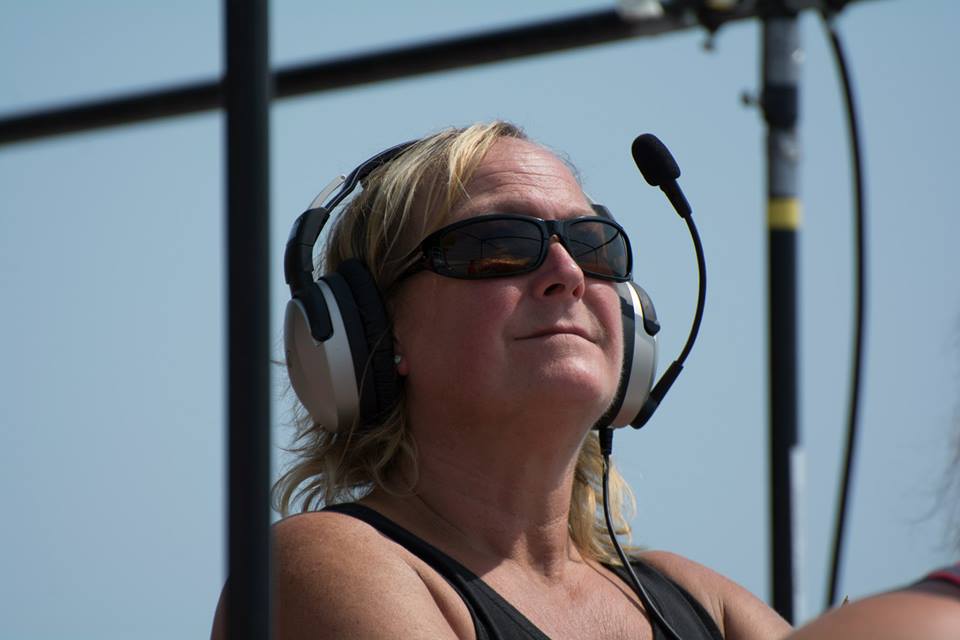 Donna has completed over 315 show and media days at over 35 sites in Canada and the United States. She has worked with all the North American jet and skydiving teams. Some of her show sites include the Catalina Air Show, San Francisco’s Fleet Week, Saskatoon’s famous Veteran event, The Canada Remembers Air Show, Niagara Falls, ON, Fort St. John, BC, Peace River, AB, Vandenburg AFB, CA and Klamath Falls, OR.